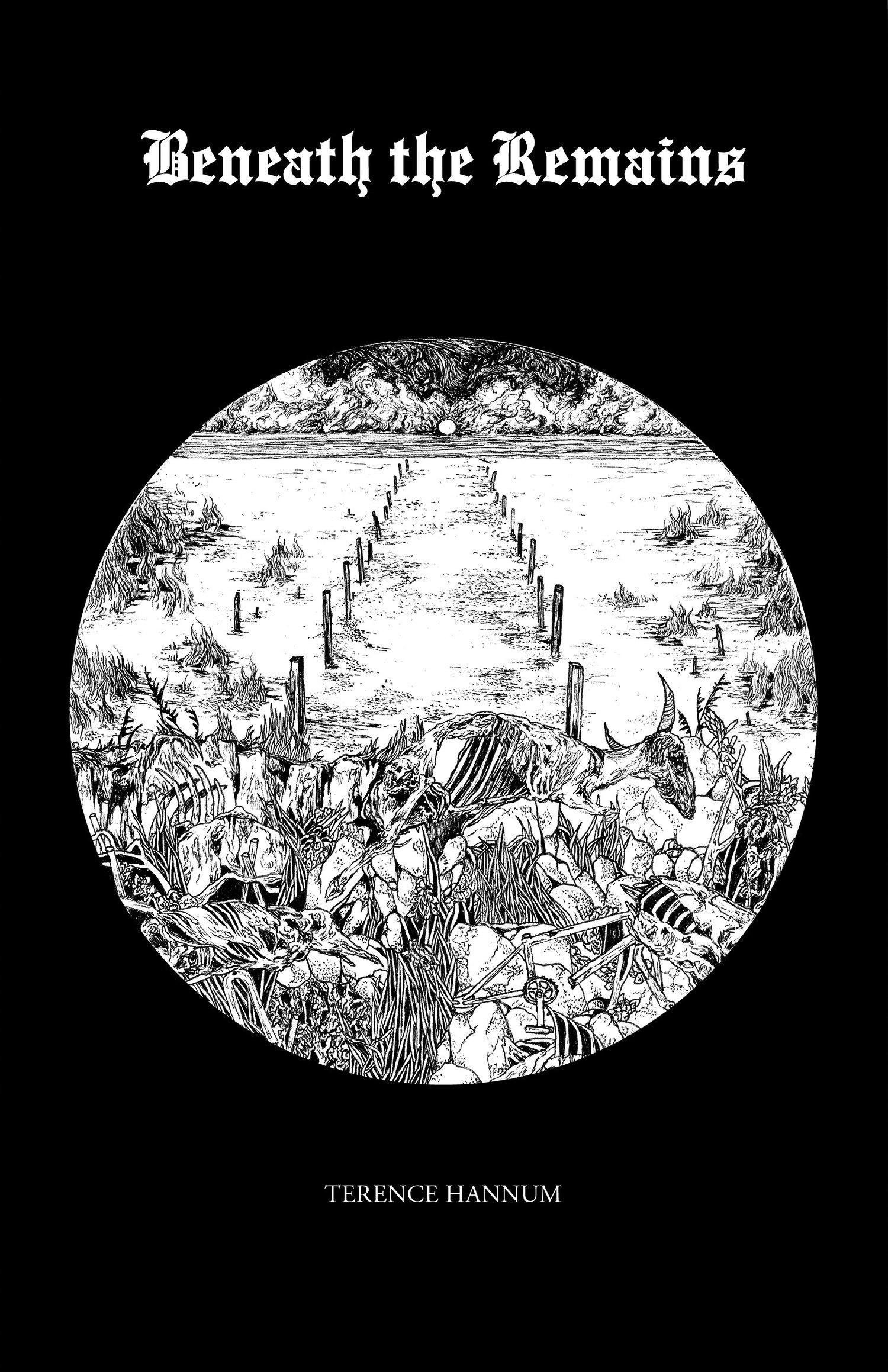 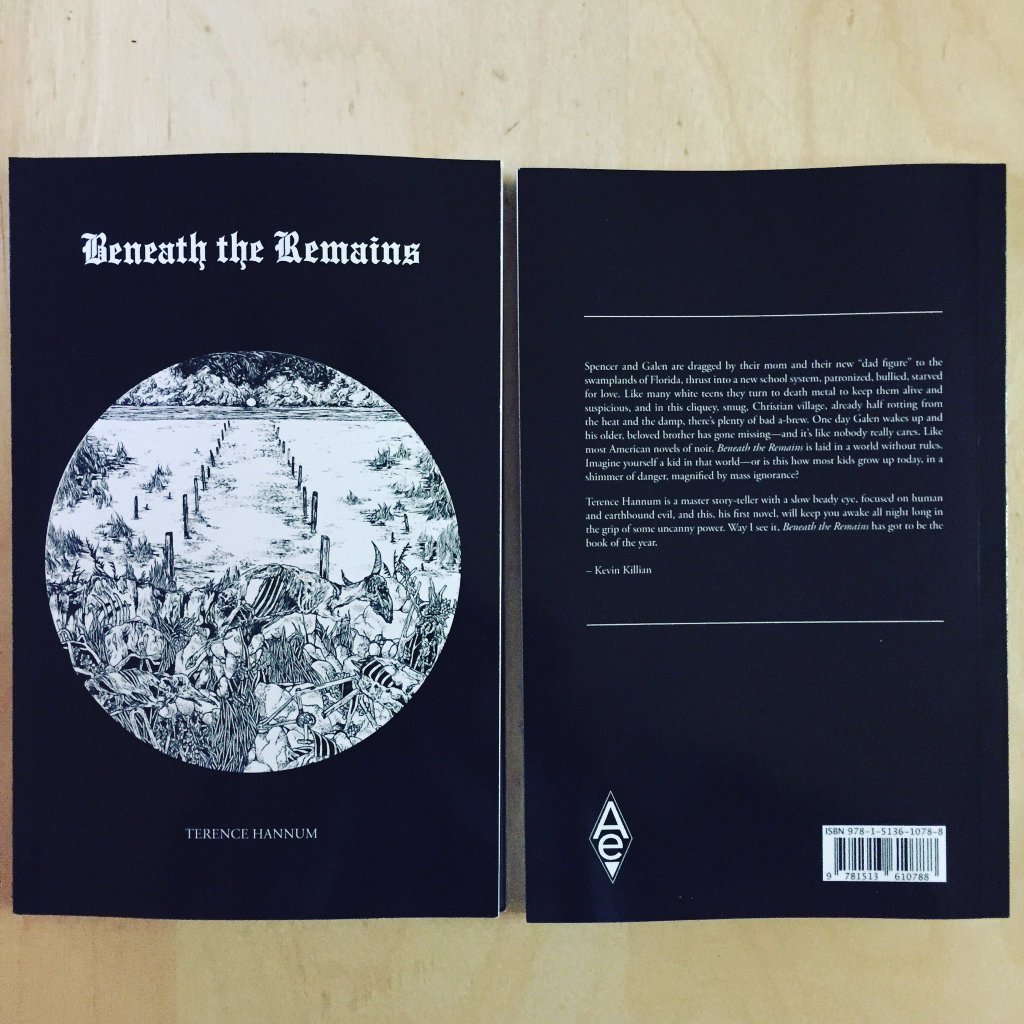 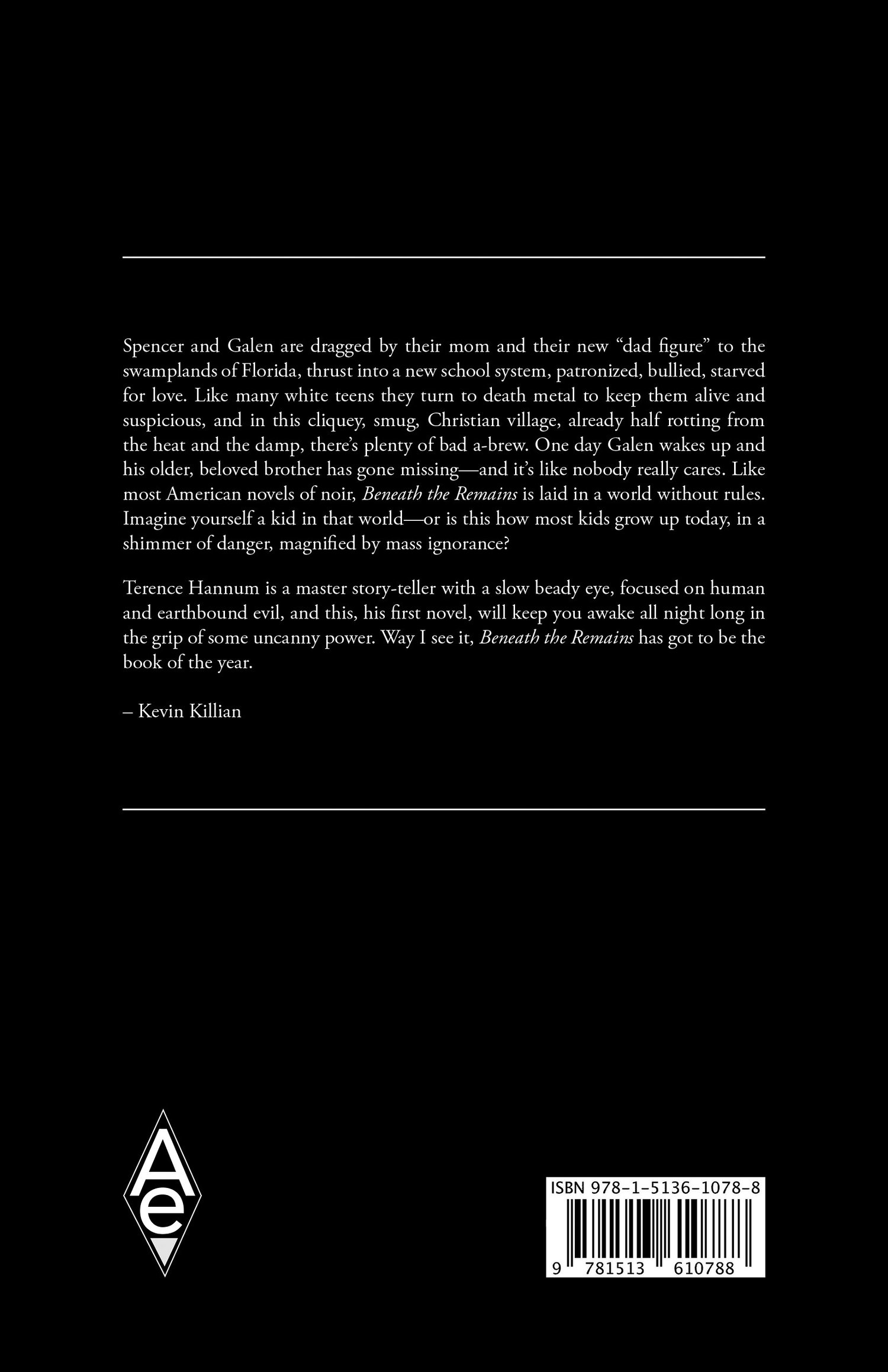 "Spencer and Galen are dragged by their mom and their new “dad figure” to the swamplands of Florida, thrust into a new school system, patronized, bullied, starved for love. Like many white teens they turn to death metal to keep them alive and suspicious, and in this cliquey, smug, Christian village, already half rotting from the heat and the damp, there’s plenty of bad a-brew. One day Galen wakes up and his older, beloved brother has gone missing—and it’s like nobody really cares. Like most American novels of noir, Beneath the Remains is laid in a world without rules. Imagine yourself a kid in that world—or is this how most kids grow up today, in a shimmer of danger, magnified by mass ignorance?

Terence Hannum is a master story-teller with a slow beady eye, focused on human and earthbound evil, and this, his first novel, will keep you awake all night long in the grip of some uncanny power. Way I see it, Beneath the Remains has got to be the book of the year." - Kevin Killian

>>>
"A coming of age novella Beneath The Remains that explores both what it means to be a teenage boy in America and the timeless outsider appeal of death metal music." - Justin Norton, DECIBEL

"Much like Harmony Korine transposed "Gummo's" ennui of broken homes and lives onto St. Petersburg for "Spring Breakers" and the first "Magic Mike" broke the spirit of Tampa strippers with recession-based woes, "Beneath The Remains" plays like Carl Hiaasen by way of Ken Loach and finds Florida's soul-crushing combination of false promises and infrastructural neglect. An illuminating extension of a hard knocked kid's fraught inner landscape." - Adam Katzman, Baltimore City Paper

"Something is very wrong amidst the palm trees and planned housing developments, and only Galen seems to know… or so he thinks. Hannum’s striking imagery and beautiful, stark prose lends almost a Harmony Korine-esque atmosphere to Beneath The Remains, a theatre of the grotesque in mankind. This novel’s faded kodachrome setting speaks to a sense of detachedness and nostalgia – the profound emptiness of being a teenage metalhead in a planned world, a stranger in a strange land." - Jon Rosenthal Invisible Oranges

"As vibrant as the imagery is, the story of Beneath the Remains plays out as a disparaging noir. Florida was not the paradise it was believed to be. Numerous homeless children and adults alike are described to live behind a Home Depot. Floridians in a local church grapple with the notion of death and cling to the idea of resurrection. Many times, the story switches between Galen’s memories of his time with Spencer and current occurrences with his friends Aaron and Zach, as well as other fleeting or recurring characters that appear. Both timelines become increasingly darker as Galen’s flashbacks of Spencer become angrier, tense, and on occasion, perverse, as they chronicle the brothers’ move to Florida. Meanwhile, his mother and stepfather outwardly struggle with Spencer’s absence and the police begin to step up their involvement in the missing person case." -The Amalgam

"The brunt of the story revolves around Spencer’s sudden disappearance, and how Galen handles this great loss. Interspersed throughout are flashbacks before Spencer went missing, including those from an abandoned house the brothers called “Satan House.” This multi-story clubhouse is another symbol of the hold metal has on them, with inverted crosses painted on walls, heavy alcohol consumption prevalent, and cassettes of the latest the underground has to offer reverberating through the house." - Dan Marsicano Vice