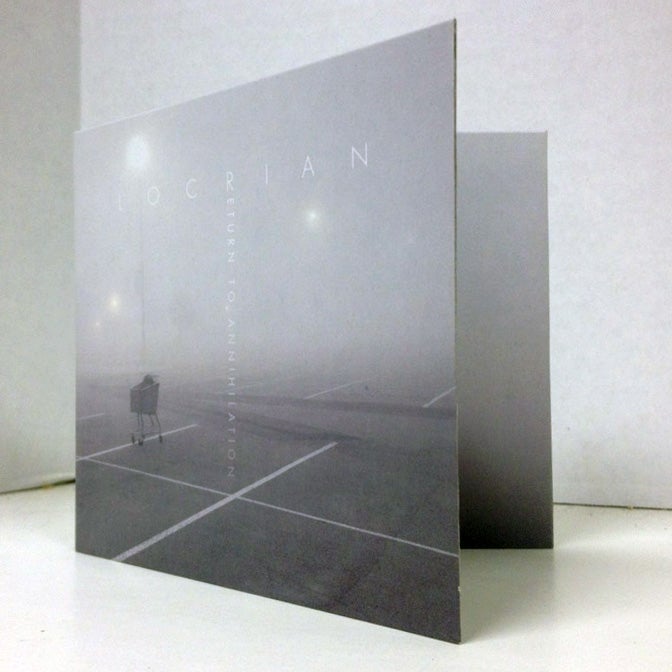 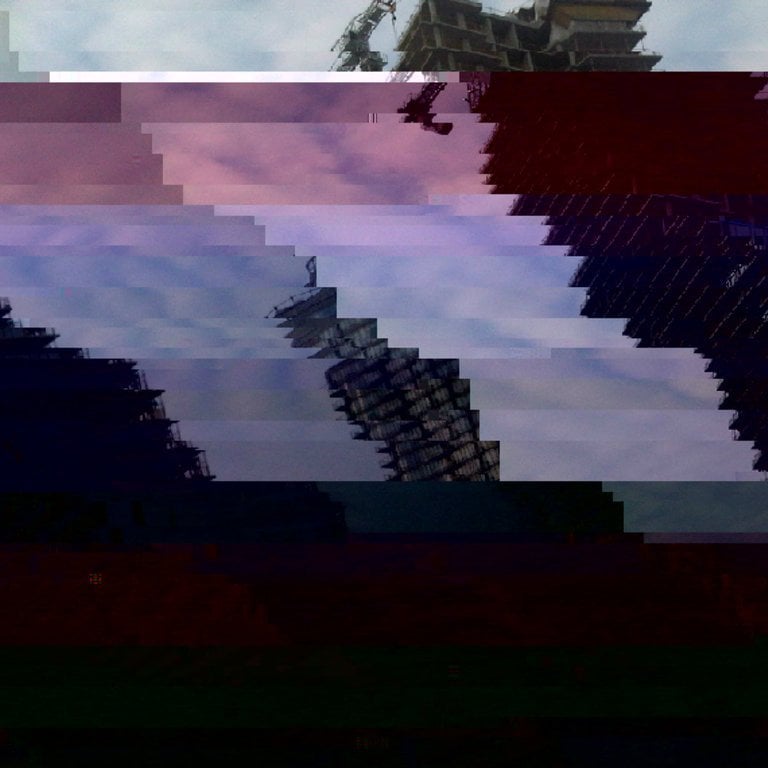 INFINITE DISSOLUTION (Relapse Records)
"Experimental, avant-black metal artisans LOCRIAN return with Infinite Dissolution, another dark and cinematic work of exceptional aural artistry. More epic and foreboding than anything in the prolific trio's catalog, Infinite Dissolution was produced by Greg Norman (Pelican, Russian Circles) and is a multi-part concept album dealing with the struggle of extinction. A seamless and harrowing blend of dark ambience, drone, black metal, post-rock, and experimental electronics, Infinite Dissolution is the perfect manifestation of modern, forward-thinking experimental music." - From the label

To purchase a digital version of this release through Bandcamp, please visit the Locrian bandcamp page at: www.locrian.bandcamp.com
credits
released December 12, 2015

Recorded, mixed, and arranged in August of 2014 by Greg Norman @ Electrical Audio in Chicago, IL.
Mastered in 2015 by Jason Ward @ Chicago Mastering Service in Chicago, IL.

“When I first heard that Chicago-based post-metal trio Locrian and German sound-collage artist Christoph Heemann had teamed up for a record, all I could think of were Felix Ungar and Oscar Madison having it out in a recording studio. But the recorded evidence indicates that this wasn’t such an odd couple after all. While Heemann has never dabbled in rock of any stripe, he’s certainly messed with pop music; on his recent LP, The Rings Of Saturn, he electronically manipulates snatches of song as well as his own instruments and recordings of the great outdoors. And Locrian’s roots are sunk as deeply in the clay of drone as they are in the loam of metal.

But this record is as much about the process of its creation as it is about any shared aesthetic. All four tracks start with Locrian’s sounds. On ‘Loathe The Light’ and ‘Edgeless City,’ Heemann began with elements extracted from Locrian’s “Extinction, while guitarist Andrew Foisy and singer/keyboardist Terrence Hannum recorded fresh tracks to kick off ‘Hecatomb’ and ‘The Drowned Forest.’ The nascent pieces were volleyed back and forth between the three men, and when they were done Steven Hess (of Haptic and On as well as Locrian) added percussion and tapes. It bears noting that Heemann stuck to synthesizer and electronics; any outdoor and appropriated sounds come from Hess, and were added later. Last word gets first impact on the opener ‘Hecatomb,’ which begins with snatches of traffic and orchestral sounds sliding in and out of some spaghetti Western guitar strumming. Give that guitar a close listen; what first sounds like a single instrument reveals itself to be a fractal expansion, layered and juxtaposed so that one guitar transforms into a honeycomb mass. Then a kick drum comes in, as if escaping from the sound hole of one of those guitars, and we’re led into a new section in which sounds come and go around a heartbeat rhythm and a single, elongated tone that sounds like the output of a Leslie speaker.

The process yields a particularly three-dimensional kind of music, one which moves purposefully forward with a narrative thrust at the same time that it seems to be branching at right angles to the left, right, up, and down from the sonic through line. Not every foray is successful; a little bit of the back-of-the-throat snarling that surfaces in ‘Loathe The Night’ goes a long way. But it’s just one stop on a trip that also takes you though solemn chants, glacial drones, and cymbal washes electronically warped until they give off a low radioactive glow. Each sound grows outward as it moves forward, making Locrian & Christoph Heemann a singularly head-expanding trip.” – Dusted

“Locrian has spent the better part of the last four years distinguishing themselves from the also-rans of the post-Sunn O))) drone scene, crafting their own distinct sound and identity amid many less engaging acts. While much of their recent work has been focused on the deconstruction of metal symbolism, paired with a more conventional rock bent, here the trio go back to their dissonant, abstract roots, with help from legendary audio and visual artist Christoph Heemann.

On their most recent albums and collaborations, the trio of Terence Hannum, Andre Foisy and Steven Hess demonstrated a distinct turn in shaping the heavily treated synths and rapid guitar work into more traditionally song-like structures, without ever fully embracing conventionality. Here that is not quite as much of a noticeable feature, with the album divided into four 11 to 15 minute tracks that lead to longer, more experimental compositions.

Even the artwork shows some variance from the norm: the band’s penchant for using the signifiers of metal are all but gone, replaced by what more closely resembles a corrupted jpeg file. The sound, however, is clearly the work of Locrian, though the contributions from Heemann expand on their shared themes and approaches to sound.

‘Hecatomb’ is perhaps the most familiar sounding. The drums are notable but low in the mix, with electronic loops and acoustic guitar strums almost giving a Morricone like soundtrack vibe to the sound. The layers are piled on, each one more complex and intertwined with the one before, all the while generating an almost imperceptible melody hidden in the detritus. Eventually it focuses on the droning guitars and keyboards, feeling more in league with the earlier, more abstract Locrian works.

One characteristic Locrian has never traded in is the intentional, and usually overwrought, evil sound that other artists have embraced. Which is, I have always felt, a good idea. It helped them to develop their own identity without letting cliché overshadow content. However, on ‘Loath the Light,’ there is a horrifying sensibility via the crashing cymbals and bent synths, magnified by Hannum's tortured, guttural screams. Do not be mistaken: this does not come across as pseudo demonic high school metal bullshit. This is much more in league with Nature Unveiled/Dogs Blood Rising era Current 93, a hallmark of terrifying recordings, and transcends any corniness usually associated with such approaches.

The second half of the album is less visceral and more reflective, such as the layered guitar and propulsive low-end parts of ‘Edgeless City,’ which is by no means a lighter piece, but just feels dark, rather than overtly malignant. ‘The Drowned Forest’ takes on a more monastic feeling, with chanted vocals starting out as the focus, with a subtle amount of musical accompaniment that eventually peaks into a complicated wall of sound. There is no sense of movement or propulsion to be heard, it instead makes for a slowly decaying piece that just looms imposingly.

It is hard to tell where the separations are between Locrian's and Heemann's contributions, and that is one of the hallmarks of an effective collaboration. Neither artist seems to overshadow the other, but both retain their own identities perfectly, with Heemann's gloriously concrete tones and post-industrial chaos matching with Locrian's metal tinged guitar and electronic layers. Both artists step a bit out of their comfort zones on this album, and the result is a glorious success.” – Brainwashed

"Taken as a whole this is Locrian at their most epic, and it is hard to believe that a simple 7″ can contain such a massive statement in sound. Although combined these tracks make up a mere twelve minutes and thirty-five seconds, this feels like a proper album, if only because of the emotional and sonic ground covered. Few, if any, bands could achieve what Locrian have achieved here. Successful Popol Vuh cover aside, the real accomplishment is a recording that contains more variety and depth in less than a quarter hour than most bands can produce in an entire career. Absolute highest recommendation possible." - Skeletons and Candy

"Taken as a whole this is Locrian at their most epic, and it is hard to believe that a simple 7″ can contain such a massive statement in sound. Although combined these tracks make up a mere twelve minutes and thirty-five seconds, this feels like a proper album, if only because of the emotional and sonic ground covered. Few, if any, bands could achieve what Locrian have achieved here. Successful Popol Vuh cover aside, the real accomplishment is a recording that contains more variety and depth in less than a quarter hour than most bands can produce in an entire career. Absolute highest recommendation possible." - Skeletons and Candy